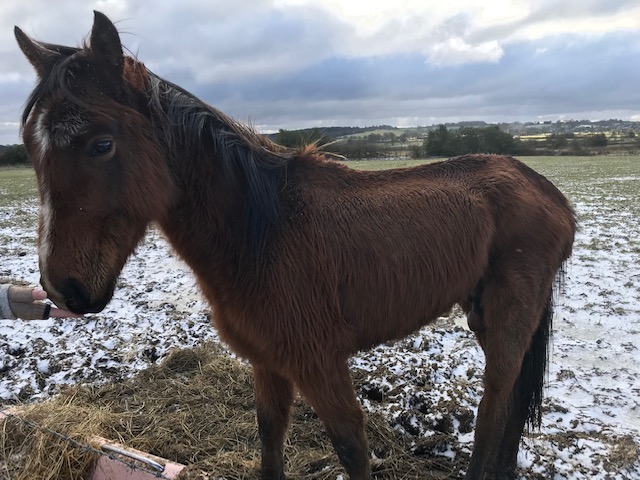 A couple have been banned from keeping equines for life after their emaciated horses were found in a Staffordshire field. The frozen body of one of the neglected horses was found curled up in snow.

Kimberley Thompson, 27, and Wayne Shepherd, 42, of Dividy Road, Bentilee, Stoke-on-Trent were prosecuted by the RSPCA after their malnourished horses — two thoroughbred colts called Mr Eddy and Mr Winstone — were discovered in Slaters Lane, Werrington on 8 February.

The pair pleaded guilty to two animal welfare offences when they appeared at North Staffordshire Justice Centre on 13 July.

Magistrates heard how RSPCA inspector Natalie Perehovsky visited the field on 8 February following a call by a concerned member of the public. She could see Mr Eddy, a bay, in the distance and could tell he was thin, despite the fact she was standing at least ten metres 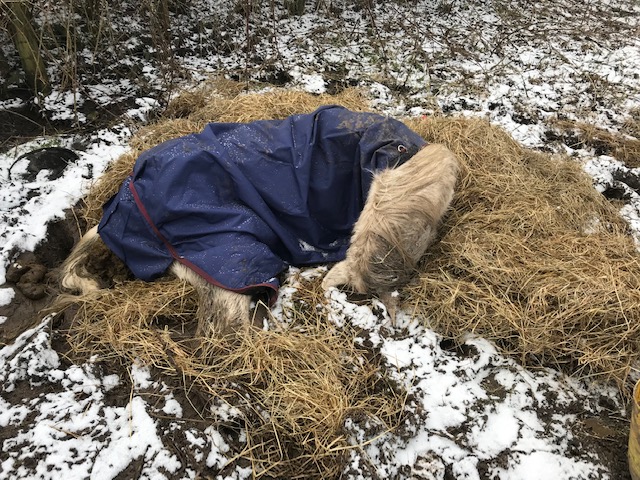 “He seemed young and was emaciated,” said Inspector Perehovsky. “All his ribs were visible and his spine and hip bone were prominent.

“He had no access to any water; all he did have was a small amount of haylage on the cold floor. There was a fresh bale of hay by the gate but the horses didn’t have access to it and it was still in its grey wrapper.”

The dead body of another horse — Mr Winston — was found curled up and frozen in snow nearby. 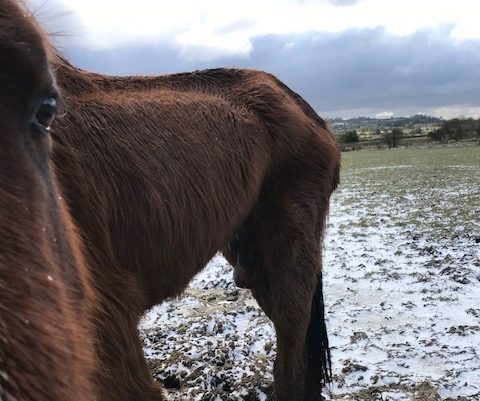 “The dead horse, Mr Winston, was a palomino,” said said Inspector Perehovsky. “He was in a cordoned off part of the field and was laid curled up on some haylage with a blue rug on.

“In front of him was a bucket of food that seemed to contain some form of liquid and grains. I lifted up the rug and could clearly see his ribs and hips. He had been there for sometime and had gone into rigor mortis so it was hard to move him to get a clear look under the rug. Plus the weather was extremely cold that day, it was snowing, so he had probably also frozen overnight.”

Enquiries were made and the landowners were tracked down and told inspector Perehovsky that they rented their field to Shepherd and Thompson. Police and vets were asked to attend and both horses were subsequently seized by officers, with arrangements made for Mr Eddy to be transported to an equine veterinary clinic. 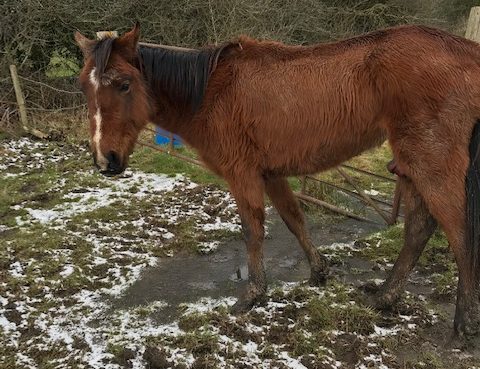 Thompson and Shepherd later arrived at the field and expressed their shock that Mr Winston had died. Shepherd said the horse had been collapsed the day before and he’d managed to get him sitting up, but he’d not called a vet and had left him where he was overnight. He said he was going to call the vet that morning (8 February) but had been waiting on an appointment. Inspector Perehovsky told him that it was now 2pm and he had still not rung one.

The horses had been fed linseed, barley, cranberry and apple juice as they had not been drinking the water, added Shepherd.

An equine vet who examined both horses gave them a body condition score of one out of nine. He said it was his opinion that Mr Eddy had been subjected to unnecessary suffering due to a lack of good husbandry and veterinary care and that this could have been prevented if adequate feeding and regular monitoring had been provided. 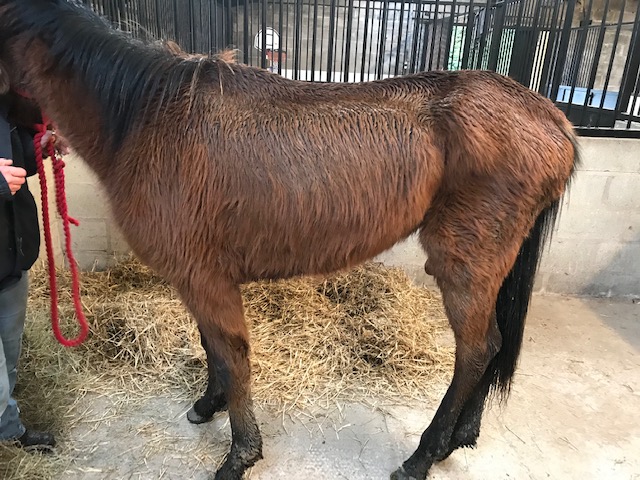 “If the owners had called for veterinary assistance when the first signs of anorexia occurred, it could have prevented Eddy from suffering and helped him to recover faster,” the vet said. “I cannot venture an opinion as to how long he suffered; however it takes a substantial period of time – several weeks – to become as underweight as Eddy.”

In mitigation, Shepherd and Thompson both expressed remorse about what had happened. Shepherd said they were struggling financially on benefits, while Thompson said she had had horses when she was younger and even though her mum cared for them, she believed that had given her sufficient experience to look after them.

In addition to the lifetime ban on keeping equines, the pair were both given a 12-month community order and told to complete 15 Rehabilitation Activity Requirement Days. They were each fined £240, ordered to pay a victim surcharge of £95 and costs of £400.

Mr Eddy has made a good recovery and will now be rehomed by the RSPCA.

Speaking after the case, Inspector Perehovsky said: “It was clear that Mr Eddy and Mr Winston had been receiving wholly inadequate care for some time. The failure of their owners to meet their needs and adequately address their horses’ weight loss, meant that both of these animals suffered unnecessarily, with one very sadly losing his life as a consequence.”