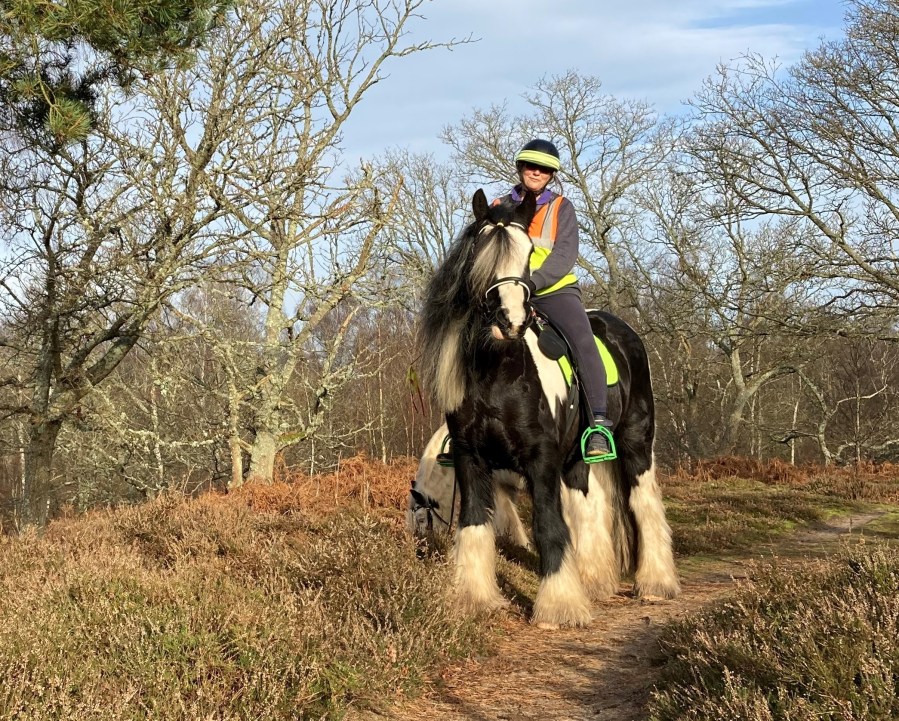 “I’d gotten so ill I needed a full hysterectomy, which took me out of the saddle for seven weeks,” says Lee, who was keen not to let the surgery keep her down. “It should have been 12 weeks, but I just had to get back to riding.”

Back on board her 15.2hh piebald cob Shadz, the pair continued to tot up the miles until a year later, when Lee became sick again.

“I started to go really downhill again and thought ‘what is wrong with me?’,” confesses Lee. “Within ten minutes on a hack, I would have to take my feet out of the stirrups because my ankles, knees and back were hurting so much.”

Lee was diagnosed with rheumatoid arthritis.

“I’d obviously had it for years and not noticed the severity of it. So I just kept hacking,” she says.

Lee, 56, is on three medications to manage rheumatoid arthritis.

“It keeps it pretty much under control, although when it’s really cold it does take it out of me,” adds Lee. “But I don’t want to stop riding yet, because there will come a time when my body can’t do it anymore.”

Lee credits her bond with Shadz, the coloured gelding who is her first horse and who she bought four years ago, for helping her to continue riding.

“He’s given me the motivation to keep going. He’s very trustworthy,” she says. “He can be silly and he spooks a fair bit, but we’re very in tune with each other. I don’t feel like I could know him much better than I do.”

However, Lee isn’t the only one to suffer a health setback. Shortly after reaching 400 miles, she noticed Shadz wasn’t quite right and, following veterinary investigation, the gelding was diagnosed with arthritic hocks.

After a break, Lee gently started bringing him back into work under the guidance of her vet.

“It was a slow process. He’s been as patient with me as I have been with him,” says Lee, who is based in Hampshire. “He makes me feel really proud.

“Overcoming our illnesses was our biggest achievement.”