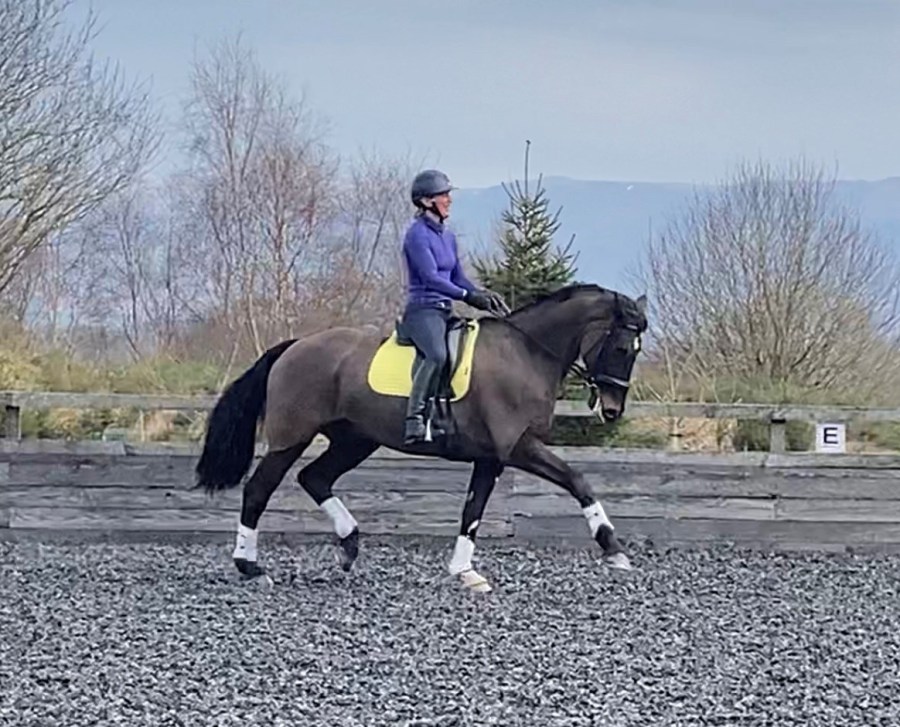 Five years after suffering a spinal injury in a fall and vowing never to ride again, Elisabeth Leslie has qualified for the Petplan Equine Area Festivals at advanced medium bronze level.

The dressage rider and instructor broke her back in a fall from a client’s horse. She underwent a spinal fusion in an eight-hour operation and was told by doctors that she had narrowly avoided paralysis.

“I remember it as if it were yesterday. 16 April 2016. I hit the ground so violently and straight on to my back,” says Elisabeth.

“I never thought for one moment my back had broken. I just lay there shocked and petrified, waiting for an ambulance to arrive.”

Elisabeth adds that she “owes her life” to the NHS.

“Following the X-ray which confirmed I had broken my back, I was taken to theatre to have a spinal fusion over five vertebrae. I was operated on from 8:00am to 4:00pm, which is long even for that kind of surgery.”

One week on, the Scotland-based rider started to walk again, and she went home a week later.

“I narrowly missed paralysis and it really made me re-evaluate life. I just wanted to spend time with my family — my daughter was only 13,” adds Elisabeth, who was told not to ride again for at least six months in order to allow her body time to heal.

“I was pretty certain that I would never get back on a horse again.

“I spent much of those six months just enjoying life and time with family, and not thinking about riding. But after a while I did start to have pangs for getting back in the saddle,” admits Elisabeth.

“I remember having a check-up with the consultant who jokingly said, ‘oh, I bet you’ve already been back on a horse’. I guess riders have a reputation amongst doctors.”

‘I plodded around the lanes’ 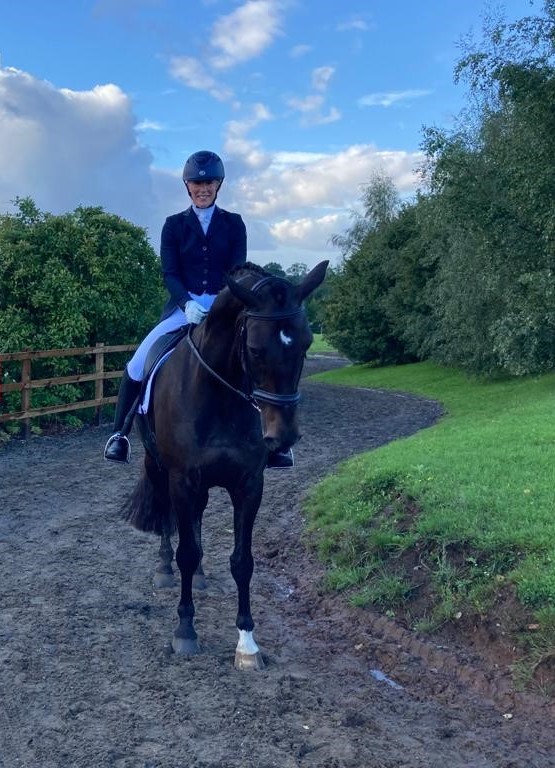 “When I felt the time was right, I summoned the courage and with support from my family, I got back on board my trusty retired 20-year-old ex-event horse,” continues Elisabeth.

“I plodded around the lanes for nearly two-and-a-half years. I was still lacking in so much confidence and barely wanted to do anything more than walk, let alone attempt to go into the school. I continued to teach but the fall haunted me for months.”

Spurred on by a friend, Elisabeth had her first ride in the arena on a horse she’d just been teaching.

“My friend had come for a lesson and after we were finished, she said, ‘get your hat’. I couldn’t put it off any longer,” says Elisabeth.

“I shook like a leaf, but I had a walk and a trot, and I really enjoyed those few moments in the saddle. That was the feeling and the inspiration I needed to start putting a plan in motion to get back out competing.”

Elisabeth was offered a six-week trial of her friend Pippa’s 10-year-old Irish-bred Kermit The Frog (‘Kiwi’).

“When I met Kiwi, I was probably being too critical and selective in my search because I knew I needed to find the right horse. Kiwi’s paces seemed simple and I couldn’t get an awful lot out of him to begin with, which frustrated me, but he has such a kind nature and was willing to try,” says Elisabeth.

‘Realising how lucky I am’

“I see competing as a reflection of my training and I knew we had put the work in, so I wasn’t trying to put too much pressure on. I just wanted to enjoy my test.

“We were second to last to go and I was pleased with our performance. As I started to untack, I thought I’d better check the formalities for the prize giving, just in case, and I couldn’t believe it when I saw the results — we’d won!”

Elisabeth went on to ride at the re-scheduled championships at Hartpury College in August 2020.

During the Covid-19 pandemic, she contested online dressage classes and won the medium summer championship.

“As a result, I decided to step Kiwi up to advanced medium online and in December we came fourth in the winter championship at this level. I was chuffed,” smiles Elisabeth.

“Kiwi is becoming stronger and more able to carry out both the lateral movements and the flying changes.  The online classes have been a monthly focus and have kept up my inspiration and drive.

“Never a day goes by without me realising how lucky I am that Kiwi landed in my stable. He looks after me and is a horse who could take me to Prix St Georges — maybe even further. To ride in top hat and tails again would be amazing.”

Your Horse is on sale every four weeks, 13 times a year, inspiring horse owners and riders to learn, improve and enjoy all things equine. See what’s inside the latest issue here