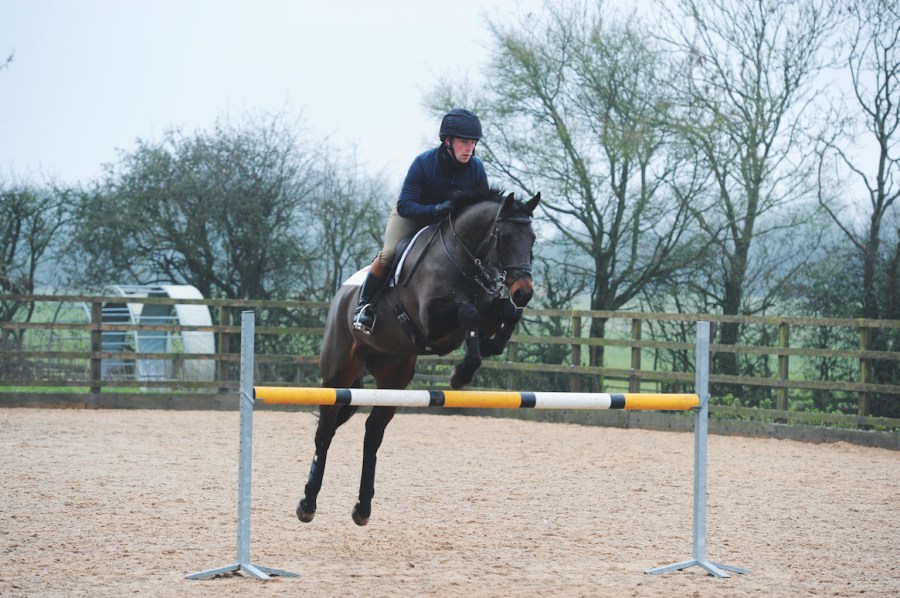 With just a few poles and a bit of imagination, you can work on your horse’s rhythm, control and accuracy. Five-star event rider Simon Grieve explains how to make the most of a jumping session with minimal equipment.

You’ll need a minimum of three poles to do these exercises, which you can adapt according to how many poles and wings you have in total.

Simon says: “Whenever I’m training, I always try to look up at the clouds so that I can ‘feel’ how my horse is going, rather than looking between his ears and obsessing about where he has his head and neck. Try it yourself: look up and you’ll be able to feel much more easily if your horse is crooked, for instance.”

2 Test your accuracy with angles

Depending on how many poles and wings you have, build two or three fences each one of your horse’s strides (about eight of yours) apart. No wings — or blocks or barrels — to put your poles on? Do this with poles on the floor instead.

“For this exercise, you’re going to have to employ your imaginary infrared beam,” jokes Simon. “Pick a line off the long side of the arena, aiming straight for the middle of one of your fences.”

Only got a small space to train in? “It’s good to have to land and then turn fast — it’s all great practise for jumping a twisty course,” says Simon.

If your horse finds exercise two a bit too easy, remove any ground poles you’ve put down.

“This won’t work for every horse, but in my horse’s case it will force him to have to think a bit harder and really concentrate on where he’s putting his feet,” explains Simon.