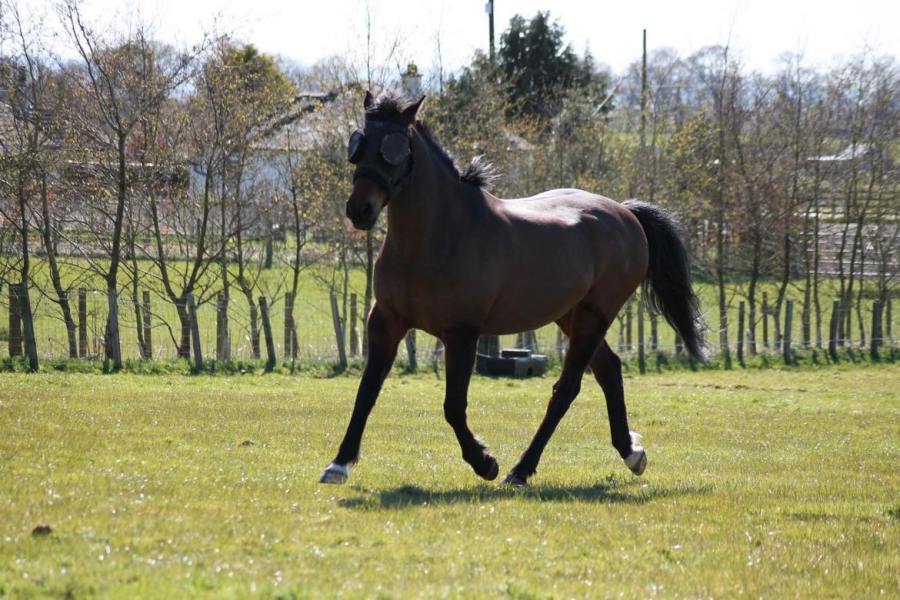 One year into owning Jack, Julie Cameron found her 15.2hh Scottish Sports Horse in the field with a badly swollen and leaking eye.

After her vet diagnosed him with uveitis – the most common cause of blindness in horses worldwide, where an inflammation of the uveal tract can cause their eye to appear cloudy or blue – the Lanarkshire-based rider found a way to manage the condition and continue her hacking goal.

“I had turned him out on a lovely sunny, snowy day to stretch his legs for a few hours and when I went to catch him I found his eye closed. It was swollen to the size of a golf ball,” said Julie.

“It was also streaming, so I thought it was best to call the vet who diagnosed him with uveitis. I was told he’d need to wear a mask to control the condition.”

Since his diagnosis three years ago, Jack has worn an eye mask all the time and he wears an eye patch as well if he has a flare up.

“He has a mask for every occasion — a bridle mask, everyday mask, stable mask and also a guardian mask, which is the one he wears during a flare up as it stops daylight getting in,” explains Julie.

“He has uveitis in both eyes and if the condition flares up, he will have one eye completely patched up while the other is covered with a darkened bridle mask. It means his vision is fairly limited.”

Despite his visual impairment, Jack still enjoys hacking on a regular basis. Julie and Jack completed #Hack1000Miles last year and are aiming to finish for a second time in 2022.

“Uveitis really hasn’t stopped us. Jack was bought as a happy hacker and we have always hacked,” says Julie.

“We usually go out four times a week and we’re lucky to have a mixture of roads and woodland to ride in. He does hack out on his own when he isn’t having a flare up, but most of the time we ride with my friend Kat and her horse Harley, who is a calming influence on Jack.

“I feel more confident having Harley next to him as a guide horse.”

Out hacking, Julie has to be mindful of Jack’s limited vison.

“When one eye is patched up he does turn his head to compensate for loss of vision on one side. If a lorry is approaching from behind, for example, I make a point of stopping and turning his head so he can see it,” explains Julie.

”He still has vision in both eyes, although we’re not sure how much. He can definitely see out of both eyes so when his uveitis hasn’t flared up we can canter and gallop.

“Jack adapts very well to having an eye patch on. His behaviour has never changed; he’s a calm and gentle soul both on the ground and being ridden. He’s also very used to having his eyes prodded by the vet.”

For now, it’s a case of managing Jack’s condition, although Julie is realistic that at some point, he may lose an eye.

“We’re lucky as at the moment his flare ups aren’t that frequent and we can manage them, so we’ve not had to discuss removing the eye yet, but I know that could happen if the flare ups become more frequent,” said Julie.