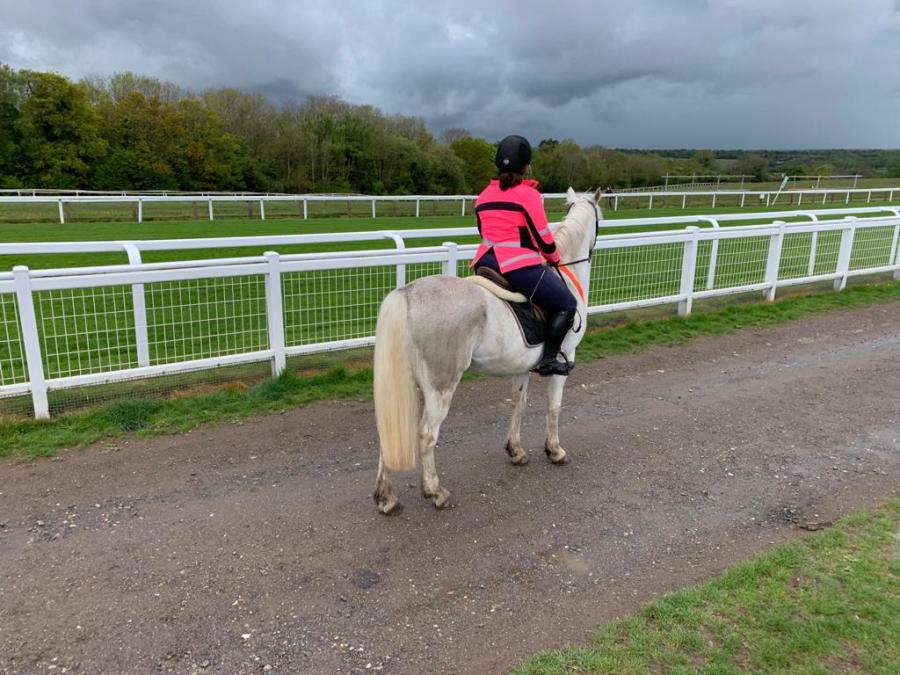 It’s not an auspicious start. The rain lashes against the car windows and my hacking partner, Fairweather Liz, is distinctly lacking in enthusiasm. That’s despite me repeatedly swearing with grim optimism that I can definitely see blue sky on the horizon.

Still, as I sprint across the car park through ankle-deep mud, I console myself with the thought that Owen will already be in from the field. I peer over his stable door expecting to see a snowy white Connemara. Instead, I’m greeted by the Creature of the Black Lagoon.

I come very, very close to calling off our ride. It has been a hell of a week. My four-month-old baby has been diagnosed with ‘failure to thrive’, which makes him sound like a consumptive Victorian urchin.

I haven’t slept for more than two hours in a row in months. And now the horse had been turned out in a monsoon without a rain sheet on. But I’ve promised Liz, so I hose off the saddle area, give Owen a vigorous towelling, and tack up anyway.

All things considered, I’m not feeling particularly chirpy as we set off for the Downs in horizontal rain.

‘This twit can’t control his dog’

My mood doesn’t improve much when we are greeted by an exuberant Labrador, which gambols gleefully around Owen’s back legs while its owner makes a few half-hearted attempts to get it back on a lead.

We share our hacking with plenty of dogs and pedestrians, so by and large Owen is pretty good with dogs. This one, however, is enjoying itself a bit too much, and is by this point virtually swinging from his tail.

As a general life rule, I always try and assume innocence when I’m dealing with members of the public out hacking. However, you don’t have to be a fellow of the BHS to realise that receiving a swift kick in the head from a grumpy Connie isn’t going to work out brilliantly for the dog.

I’m cold. I’m wet. And this twit can’t get his dog under control.

That’s it. I unleash a full force, Level 10 Teacher Stare upon the owner, dropping my voice an octave, and booming: “GET THAT DOG ON A LEAD BEFORE IT GETS ITS HEAD KICKED IN” with enough venom to make year 10 quake in their boots.

There is a moment of silence while the owner sheepishly retrieves his dog and backs slowly away. Liz and I continue on our way for a minute in silence.

“You know,” says Liz contemplatively, “you’re really quite scary when you do that”.

‘Teens speed towards us on bikes’

On we trot, water slowly dripping down our necks. And then we see a group of teenaged boys on bikes speeding down the bridleway towards us. I am steeling myself for another showdown, but as soon as they see us, they stop, get off their bikes, and stand quietly by the side of the path waiting for us to pass.

It couldn’t be further from the incident with the pillock and his naughty Labrador, and it is a lovely reminder of how kind and thoughtful the majority of members of the public are.

And then the sun comes out. It’s stopped raining, and suddenly it doesn’t matter that we are drenched and covered in mud.

I think that sometimes, it’s enough just to show up and get out there. It doesn’t matter that we didn’t go very far, and we just pottered along the route that we’ve done a thousand times before.