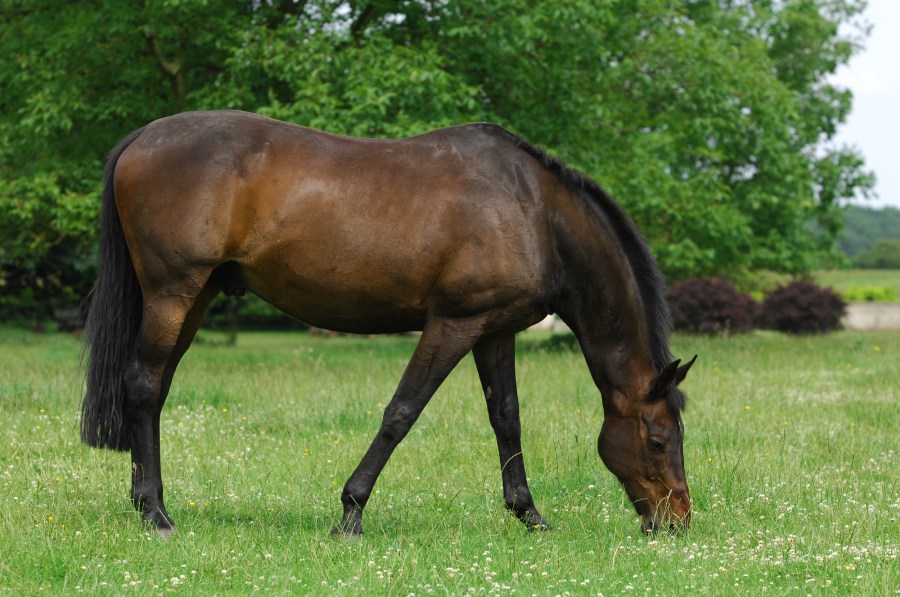 Your horse’s food goes on quite a journey from mouth to muck-heap – we follow the twists and turns of the equine digestive system to explain how it all works.

Put simply, the digestive system is responsible for turning food into the energy that’s required for the body to function. Also called the alimentary canal or the gastrointestinal tract, it starts at the horse’s mouth, where he takes his food in through grazing, masticating (chewing) it with his teeth before it’s passed into the oesophagus and swallowed into the stomach.

From there, food is gradually digested and broken down into one of five basic nutrients – proteins, fats, carbohydrates, water and vitamins and minerals. As food passes through the horse’s system, specialised areas deal with the different processes involved in absorbing nutrients into the bloodstream, before waste matter is passed out at the far end, so we can enjoy a spot of mucking out or poo picking!

The equine digestive system is divided into the foregut and hindgut, with the majority of digestion taking place in the hindgut, which enables horses to digest both concentrate feeds and turn cellulose, the hard fibrous structure that gives plants their rigidity, into energy for movement, tissue growth and repair and maintaining body heat – the very businesses of life itself.

Join us for a walk through the equine digestive system – we guide you through what’s what, from the way in to the way out.

The mouth is the start of the digestive system. Horses use their lips to gather blades of grass (or other kind of food) together before the front incisor teeth cut it and take it into the mouth, where the tongue moves it around the mouth. The back teeth (premolars and molars) grind it up and it’s formed into a ball, called a bolus, which is then propelled into the oesophagus.

The process of chewing triggers the production of saliva in the mandibular, parotid and sublingual glands within the horse’s head. Horses produce around 10-12 litres of saliva every day, which lubricates food and begins the digestion process.

When the horse swallows, the epiglottis blocks the trachea so food doesn’t enter the airway, and the chewed food enters the oesophagus, also called the gullet. Between 1.25m and 1.5m long, the wall of the oesophagus has smooth muscle within it which contracts in a wave pattern to allow food to be pushed down to the stomach, in a process called peristalsis.

This is the opening between the oesophagus and stomach, and it acts as a one-way valve. It’s very strong in horses, and in rabbits too, and is why it’s not possible for horses to vomit.

Shaped roughly like a ‘J’, the horse’s stomach is very small relative to the size of the animal, and compared to other species of a similar size. This is because the horse is designed to be a trickle feeder, eating little and often, plus the majority of digestion occurs in the massive hindgut. The stomach contains gastric juices and hydrochloric acid, which help break food down into ‘chyme’ so the rest of the digestive system can do its work.

The stomach is made up of two types of tissue – the lower section is lined with glandular mucosa, which secretes acid to aid digestion, and this section contains in-built protection so the stomach acid doesn’t damage it. The upper section is lined with what’s called squamous mucosa, which doesn’t have this protection and is therefore vulnerable to irritation if it comes into contact with stomach acid. The two sections of the stomach are divided by a line called the margo plicatus, where the signs of stomach ulcers can often first be spotted. When food is ready to pass out of the stomach, it does so through another control valve called the PYLORIC SPHINCTER.

Most of the digestion and absorption of nutrients occurs in the small intestine, which is made up of three parts – the DUODENUM, the JEJUNUM and the ILEUM.

The DUODENUM is the start of the small intestine and is around one metre long. Food is broken down into basic nutrients here, thanks to the secretion of enzymes from the pancreas and liver. Bile is also secreted direct from the liver, as the horse has no gall bladder to store it.

The JEJUNUM is a longer and more folded section of the small intestine, measuring around 19 metres long. The chemical breakdown of food is finished here, with nutrients absorbed into the bloodstream to be used by the body or stored in the liver.

The ILEUM is the final part of the small intestine, and is around one metre long. It continues the absorption of nutrients and controls the passage of partially-digested food, or ‘ingesta’ (now only containing fibre and water), into the LARGE INTESTINE.

This area of the digestive system is around eight metres long and is made up of multiple parts – the CAECUM, LARGE and SMALL COLON and the RECTUM.

The CAECUM is a vital organ for the horse. It’s very large (up to 35 litres by volume) and is the equivalent of the human appendix, only in horses it has a distinct function. The caecum is basically a very large vat containing many millions of specially-adapted bacteria, called gut flora, which break down cellulose, the hard fibrous structure that gives plants their rigidity. By breaking this down into simple compounds, the caecum allows the horse to digest it and retrieve nutrients from it. A horse relies on gut flora and can’t survive without them, but they are very sensitive, which is why any dietary changes should be introduced gradually.

From the caecum, food enters the COLON where the reabsorption of water is a key function. The colon is around 3.5 metres long and has a capacity of some 90 litres, but has to fit into a small space in the abdominal cavity. The twists and turns this requires means this organ can be vulnerable to blockages and impactions – there are four sections with three sharp bends within the large colon, called the sternal, pelvic and diaphragmatic flexures. Blockages often occur because of a change in regime, such a horse going from being out 24/7 to being stabled.

The SMALL COLON continues the absorption of water and electrolytes, and any ingesta left then passes into the RECTUM, which is around 30cm long and stores faeces ready for passing out of the body through the ANUS.

The ANUS is another sphincter muscle, controlling the passing of faeces.